Outside Mullingar a fable that stretches our hearts
All the basic condition theatre requires is that fire last night &
those costumes & the human voice & people gathered together.
Sir Trevor Nunn, Director (Cats, 1981 \ Les Miserables, 1985)

From the footlights :  Farm life in the Irish Midlands circa Y2K times. Life-long neighbours Rosemary Muldoon and Anthony Reilly are both spinsterish, he 42, she 35. Rosemary suppresses an abiding attraction for Anthony since they were kids despite the fact he knocked her down & broke her crown when she was but six.

For his part Anthony not only hates the aching drudge of farming chores but comes off a bit daft as well. He's fagged and bored by each day's routines, though he performs his labours & burdens dutifully to keep the 120-year-old family place marginally sustainable. What he loves most, however, is hearing his fields talk to him. "Da" threatens to disinherit the unmarried, childless Anthony and offer the farm up to his American nephew Adam instead.

In the dim, blue murk of rain the talk is mostly melancholy stuff of loves lost, despond & death -- the yin opposite Irish-jigs-&-beer that are the country's defining yang. Sentiment being sentiment, however, we sense a happy ending in the making from this John Patrick Shanley script (remember his Moonstruck with Nick Cage & Cher?)

How it's all put together : The set-up toggles between a quick-tongued and belligerent Rose (Rebecca deBoer) swapping chit-chat while puffing her pipe out under the barn eaves with the dour, closed-off Anthony (John Emmet Tracy). "People don't appeal to me that much," he tells her. She flips back "That's normal. Who likes people? Nobody." A wee taste of Harold Pinter re-born a Celt in such exchanges. It is clear Rose & Anthony's trek to each other's heart will be more goat track than evergreen lane strewn with petals.


Meanwhile in the farmhouse kitchen aging dad Tony (Ron Reed) muses over tea with Rebecca's mama Aoife (pron. EEfa) played by Erla Faye Forsyth. Given they just buried her husband Christopher,  it's obvious the measuring tape of life is nearing its final few millimetres for both of them, too. They ponder -- with wit-&-wonder (some call it blarney) -- just how soon their own life stories will continue only in someone's memory. A land-locked strip of disputed land threatens in any event to scuttle Tony's sell-the-farm plans.

When Rebecca learns of the potential disinheritance to the American relation wanting to find a wife on the Emerald Isle, she pounces. She seethes, storms, unleashes a torrent of sarcasm to match the near-constant rain around them.

How does a happy ending emerge from such as this? Because it's the only alternative rom-com narratives ever offer up. And fitting divertissement in the chaotic, cynical times that confront us regardless of Mr. Shanley's benign but somewhat contrived script & characters. 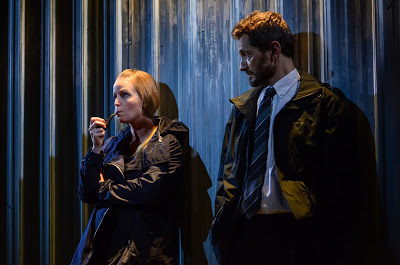 Shanley strives to tell a tale built on the lilt and lyrics of bucolic farm life in Ireland. He relies on stuff of life lived there as well as certain stage stereotypes. It is a fictional invention whose actors under director Angela Konrad drive the storyline inexorably forward to its self-obvious conclusion.

Assisting mightily was the timepiece farmhouse kitchen set by Carolyn Rapanos that was choice and earthy. But it was the faux board-&-batten translucent barn wall lit up first with rain and thunderstorms, then a firmament of fake stars followed by bursts of sunlight as imagined and executed by Lauchlin Johnston that stole the show for visual effect and mood.

In Konrad's program Note, thus : "Even if we have never been to Ireland, our souls know this place. The fabled land casts a spell even while the commonness of the kitchen calls us us home."

Acting pin-spots : As noted above, the actors drive this script, not vice-versa as is often the case. Most of the dialogue is just that, the cast hived off into two's to tell their tales. Humour, irony, pathos, memory, the need for connectedness, the fear of intimacy, family feuds and forgiveness, a swack of "cracked" people looking up and wondering why-&-wherefore -- it's all there in a metaphorical Irish stew that is spicy and tasty and designed to please one's taste for poetic schmaltz.

Speaking of charm, this reviewer found Ron Reed as the Reilly patriarch Tony at the absolute pinnacle of his character-acting prowess, but Erla Faye Forsyth as Mama Aoife nipped niftily at his heels in chasing down Shanley's dialogue delights.

But of course the gist of the play is on the unrequited would-be, wannabe lovers. Act 2 is just them pursuing grace after their folks have bequeathed each of them their patch of mortal coil. Undiminished kudos to both Mr. Tracy as Anthony and Ms. DeBoer as Rosemary for gesticulation, stage business and dialogue dynamics that they obviously possess inherently but were magnified so creatively and imaginatively under the guiding hand of Director Konrad.

Who gonna like : Outside Mullingar is a rom-com, no doubt, but less a drama than a tone poem, a paean to the idylls and charms of an imagined bucolic inland isle. There are kindred pockets geographically here in B.C., no question, but not the heritage component and idiosyncratic stereotypes European olde sodde provides.

These characters created by playwright Shanley work their way into our hearts because they breathe : genuine hopes and pain and loss and bewilderment are central to each of them. Which is way more than can be said for 95% of t.v. or cinema fare these days. For a momentary embrace of such emotions and values, Outside Mullingar is precisely the ticket you need to punch.

Posted by Baird Blackstone at 00:15