Beauty & the Beast a love-in of fun, festivity

From the footlights : Likely no question my wife and I were the only viewers at the Stanley last night who have never seen Disney's iconic Oscar-winning 1991 cartoon flik. Neither any of ACT's four previous mounts of this show. Thus except for the movie duet with Peebo Bryson-&-Celine Dion, its music was as foreign to us as its Grimm-like plot line.

For others equally dim about all this, a Plot Quicky helps and won't be too hairy to sum up : Snotty prince disses a witch. She curses him. Makes him into a bearded Minotaur. Gives him a magic rose whose petals will all fall off and petrify him forever in his beastliness. Unless he finds a way to give someone love and be loved in return.

The prince's household staff are cursed, too : in the ten years since the witch's visit they are all slowly being transmogrified into household objects like a teapot, a featherduster, a wind-up clock. Like Beast, their fate threatens to be permanent. Entre Belle, a beauty who gets caught up in palace politics saving her eccentric Dad from attacking wolves. Will she learn to love the Beast, and he her before the last petal drops?

What the show brings to the stage : Fact is the premise of La Belle et la Bete (as originally scripted in 1740 by French novelist Gabrielle-Suzanne Barbot de Villeneuve) is downright off-putting. Princeton University's WordNet dictionary links two definitions associated with la Bete : "the stupid brutal quality of a beast" and "unnatural attraction, including sexual, to a beast".

So p.c. trigger warning called for : viewers have to overcome innate prejudicial distate for beastly conduct. Hard to do when one covers up the chin whiskers on the program graphic and the remaining image is a dead ringer for a certain Twit next door who thrives on fake news. 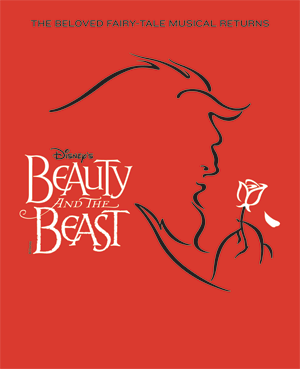 The way to sidestep one's anti-beastie bias, however? Not hard at all this theatre season. It'll happen just like magic through this magnificent Arts Club show, no question. Make the beast look less Washington, D.C. horror-show. Make him more like your hippie uncle Herbie who lives in the wilds outside Nelson. Put a suit on him and the possibility of true love flowering between him and Belle (syn : goddess, enchantress) soon takes root.

Production values that shine through : Spectacle is what the stage show is all about, and spectacle the Bill Millerd production delivers in spades. It's a roundhouse flurry of costumes, music, lights, sets, staging and absolutely eye-popping choreography.

With no comparators in memory to clutter up the mind, the expression "you never have a second chance to make a first impression" was never more applicable than here.

Alison Green's set with its numerous fly's and scrims and scenery wagons was a compleat envelopment of the sumptuous Stanley stage. Coupled with Gerald King's richly inventive lighting design the effects are dazzling and enchanting.

Then there's Barbara Clayden's captivating and dare I say? bewitching costumes dozens and dozens over for the 20 characters who roam and romp and rollick up, down, over-&-around the kinetic sets from castle to townsite to woods for two mesmerizing hours.

Mesmerizing in large measure because of choreographer Scott Augustine's re-do for the show of local wizard Valerie Easton's 2008 fancy footwork. [See addendum.] First there's Gaston's beer stein swillery antics pictured up top. Then comes the "Be Our Guest" caper of the troupe with knives & forks & plates & platters busting out of them all over not to mention their folies bergere kick-up that was clockwork perfect. Truly a hoodoo of wonder and amazement to watch and cheer to as the opening night did with gusto! causing a wee delay in the onset of Act 1's closing scenes.

Absolutely terrific co-ordination of the off-stage orchestra with the on-stage action. Of the band, Henry Christian's trumpet, once again, proves how crisp and heavenly that horn can be.

And speaking of sound, Chris Daniels' sound design was not just notable but embracing. Never in any ACT performance has the amplification of singers' voices with live orchestra been more stunning on the ears : every lyric and word heard perfectly, no drowning out by the band.

Acting pin-spots : Fewer "pin spots" to note than full-on kliegs and floods for the whole ensemble. But as the muscly bully Gaston, Kamyar Pazamdeh was acting buff writ large made the more spoofy by Vincent Tong's priceless turn as his sidekick LaFou.


Shannon Chan-Kent's Belle was charm personified opposite Jonathan Winsby's complex and compelling Beast.  Not possible to review the show without mentioning butler Peter Jorgensen's Lumiere with his faux Peter Sellers doing faux French. Just a riot. But magnified deliciously by the skippery scantering Shawn Macdonald appearing once again as chief-of-staff Cogsworth in a role delivered more Clockwork Orange than Piaget. Pure delight the two of them riffing off one another.

Who gonna like : This section should be re-named Who not gonna like and it would be over in a heartbeat. Must say in six years doing BLR I don't believe I've heard an opening night audience so robust and spontaneous and eager in their joy! at what they're seeing unfold as musical comedy theatrics in front of them.

Never mind the Standing O! that is commonplace in Vancouver. But this time so well! well! well! deserved. The fact that Act 1's conclusion was slightly delayed due to the rousing applause and Huzzah's that went on-&-on-&-on for the "Be Our Guest" song-&-dance number was a first in my experience locally.

Personally I dig the intense and gritty small-stage Mamet-y stuff more than I do big-stage musical theatrics. But this, this! was a night to remember, particularly all the dramatic and theatric build-up in the first act.

Truly a spectacle that treats eye-&-ear-&-funny-bone-&-heart in equal measure. Kids loved it, parents too, the grands as well. You owe yourself this one, Vancouver.

THIS PRODUCTION OF BEAUTY AND THE BEAST IS DEDICATED TO THE MEMORY OF AMY WALLIS.

Beauty and the Beast has always been one of my favourite shows, and holds a lot of special memories for me, because my daughter, Amy Wallis, and I did it together for four Christmas seasons. It was the first major lead role of her career, which subsequently led her to Charlottetown (where she played the lead in Anne of Green Gables for four seasons), Toronto, Stratford, and many other places across the country. But as long as we were doing Beauty and the Beast, we knew that at least she'd be home for christmas! Her last performance was as a soloist with the Vancouver Symphony Orchestra in the fall of 2014. Sadly, she was taken from us, after a battle with leukaemia, in June of 2015.

When Bill decided to remount Beauty and the Beast this year, it was with a heavy heart that I declined my involvement. Amy loved this show and very much wanted to do it again, and I couldn't imagine doing it without her.

Many thanks to Bill, and to Scott (who has generously taken on my original choreography), the Arts Club, the very talented Shannon Chan-Kent, and all of the cast of Beauty and the Beast 2017 for their love and support. I know it will be a wonderful show.

Dancing, in previous productions of Beauty and the Beast, to Valerie Easton's inspired choreography has always been a pleasure. Being asked to be part of the 2017 creative team and adapting that same choreography is an honour, though a humble one, knowing the circumstances of Valerie's absence. As Production Choreographer, the challenge and goal has been to retain the integrity of Valerie's well-designed movement and overall artistic vision, while adding or adjusting based on the new set design and staging.

My thanks to Bill and Valerie for their trust and generosity, and to the cast and everyone involved for their hard work and dedication.

Remembering Amy Wallis, a wonderful and talented colleague and our first Belle.