From the footlights : Buddha noted that in search for the "other" we are almost always in search of "self" as well. "It is better to conquer oneself than to win a thousand battles," he cautioned warriors. Probably no more obvious example of this than in a colonial jurisdiction such as Kowloon, Hong Kong, 1924 when you happen to be a chippy and aggressive Chinese cop stuck in a hostile and racist and otherwise wholly-white-skinned Brit administration : a word like "micro-aggression" would be guffawed and its user promptly booted out of the canteen in this 95-year-back setting.

Gateway Theatre artistic director Jovanni Sy recently told the Straight his intent in creating Nine Dragons was to avoid the classic Charlie Chan detective stereotype of yore. Instead of someone reticent, passive and "inscrutable", his character is designed to be more the "toxic masculinity" type, he said.

Pit just such a cop against a roaring 20's Chinese wannabe gangster in tuxedos who is chief suspect as Kowloon's serial killer. Vintage cat-&-mouse : a wealthy schmoozy Hong Kong night clubber pitted against a fellow Chinese in khakis who kowtows to a "justice" system that treats him with raw contempt. 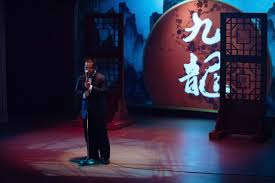 How it's all put together :  The show is co-produced by Calgary's Vertigo Theatre along with the Royal Manitoba Theatre Centre who together launched the world premiere of the show in Calgary last Thanksgiving. Vertigo -- as its Alfred Hitchcock film noir connect back to the 1958 flik suggests -- specializes in the psycho thriller whodunit theatric genre : the company's artistic director Craig Hall once again directs the action. He also helped playwright Sy shape some of the script's intricate timing and cadence.

Until now, the "Kowloon Ripper" as he's being called, has killed only Chinese nationals. This time it's an upperclass English woman. Finally police Chief Inspector Nigel Dunston-Smith (Duval Lang) sits up and take notice -- grumpily and edgily : it is 1 a.m. and he's been drug out of noddyland. This latest victim, like the others, has had her hands chopped off and her tongue ripped out.

Det. Sgt. Tommy Lam (John Ng) -- the best Chinese crime-buster on the force with a 50% case "kill" ratio -- is subordinated in the case by his boss Senior Inspector Paul Beverly (Scott Bellis). At the order of Dunston-Smith he brazenly appoints a Scotland Yard importee named Sean Heany (Toby Hughes) to tag-team the case with Lam. He's never worked a homicide before. Regardless they promote him to Inspector, as if to demean Lam's street smarts and generally let it seem as if the round-eyes are running the renegade Lam's homegrown show.

Completing the team is coroner Dr. Mary Weir (Natascha Girgis) who is Tommy's secret lover. She slides him key case evidence against flashy suspect Victor Fung (Daniel Chen) who is the prodigal son of shady H.K. mogul Sir Hamilton Fung. At dad's insistence, Victor is programmed to assimilate into H.K.'s old colonial world so seamlessly he was never even permitted to speak Cantonese, only the King's English.

Oh, and of course, like any good hard-boiled detective yarn, there's always a double-cross or two that have to play out to make whole cloth out of the various plot and theme threads.

Production values that hi-lite the script : Four of the design team who in Spring, 2015 staged the gruff and moody Raymond Chandler's Farewell, My Lovely for ACT have re-upped to mount this latest noir effort by Mr. Sy and Gateway. Joining director Hall are Scott Reid on sets, projectionist Jamie Nesbitt, and costumer Deitra Kalyn. Sound designer Andrew Blizzard was challenged to live up to his surname with a blitz of 1920's Chinese influences buffeting about more familiar western musical riffs.

As they did in Lovely, Messrs. Reid and Nesbitt work fist-in-glove. Reid's set screens glide and slide effortlessly between a Hong Kong cop shop, the Nine Dragons nite club and Victor Fung's mansion up on Victoria Peak and are sumptuous in rich but crisp detail. Mr. Nesbitt's video projections are once again a wholly intuitive chiaroscuro of out-takes : a murder of crows taking flight into clouds; waves; funicular tracks; slowly oscillating overhead fans. All of it joins together to hi-lite the dynamics that underscore the desperate and villanous gangsters of Kowloon and its drug trade.

Winnipeg Free Press reviewer Randall King perhaps said it best six months back when he quipped "Vancouver playwright Jovanni Sy's hard-boiled mystery Nine Dragons is a play, yes, but directed as it is with a certain cinematic flair, it registers as a screenplay that got lost on the way to the cineplex and found itself on a theatre stage."

Plotline fresnels and acting pin-spots : Playwright Jovanni Sy achieves every objective he set out for himself. The race and sex subjugation of both Lam and Weir intersect cleverly. Lam clearly thrives on insolence and impudence. Nothing better than his face-to-face with Dunston-Smith after being called "chink" : he spits back literally nose-to-nose into boss Nigel's face that he is a "pasty Limey prick!" The exchange elicited hoots and huzzah's from the crowd, not any gasps whatever. The notion of oppressive white privilege -- even among the blue-rinsers at Saturday's matinee -- is at last being accepted at face value one could say. (Yes. Lam got fired on the spot.)


This is a powerfully-cast troupe that Director Craig Hall has assembled. While the central focus is Ng who carries his shoulders and neck as if straitjacketed much of the time -- symbolically -- Chen as the gangster manque Victor threatens to upstage him with his unctous condescension.

Special mention to Hughes as the clipped Scot partner who is Lam's foil and friend, ultimately. Also to Lang as the egregious Dunston-Smith : he evinced a loathesomeness that might resonate for North American audiences if they but conjured J. Edgar Hoover meets Sen. Joe McCarthy meets Sean Hannity. Just such, only with a pasty Limey prick accent.

Who gonna like : Should the in-your-face racial characterizations on show here either pass over you or just pass you by, fact is this is a first rate whodunit. It has all the usual quantum of coincidences and manufactured plot-twists and ironies and paradoxes that this genre demands.

And no question, playwright Sy was spot-on in imagining during his five years of putting all this together that a 20's setting in exotic Hong Kong and its Star Ferry over to the intimate confines of Kowloon is a perfect mix. Especially so for West Coast audiences whose proximity to oriental cultures is immediate and embracing.

My personal litmus test for Vancouver theatre is whether I would take a second look or not. You bet I would. This is edgy good stuff indeed.

Posted by Baird Blackstone at 18:52