N.B. The following is an updated redux of BLR's May, 2017 review of this show that I am unable to attend this year. Only two of the actors / performers have changed, but the production team is identical thus the show's inherent excellence and creativity will no doubt reoccur without missing a beat.

Joni Mitchell has always challenged us from the get-go of her professional career to re-imagine ourselves and our messages. Thus the winking irony of "Big Yellow Taxi", for example, on 2-3 levels. Such seems, too, to have been a kernel of the thought behind co-creators Andrew Cohen and Anna Kuman for their unique show Circle Game : Re-imagining the Music of Joni Mitchell that opened last night and runs at the Firehall through February 9, 2019.

Six musicians, 18 instruments, 28 Mitchell songs, over 100 minutes of millennial out-takes on Mitchell's singular music and lyrics. Begs the question what a cigarette-smoking flower child of the hippie 60's with her acoustic guitar and odd free-form chord-licks has to tell contemporary audiences raised on hip-hop / electro-pop and Facebook.

Mitchell's "Circle Game" ["We're captive on the carousel of time"] was and will always be a popular theme among Boomers. But, again, what's the hook today? The intent of Re-Imagining is just that : to try to wrest from Mitchell's music and her lyrics a way to cycle back to 60's and 70's themes -- eco-angst, feminist-&-personal liberation, love-&-loss, the joys of village and the magnetism of community -- in a way that contemporary audiences can relate to.

Huge social concerns back in the day to Mitchell's generation, many of these issues were pushed aside as Boomers became co-opted by the pursuit of personal wealth, family, security.
More recently the "pussy power" protest march in Washington, DC and elsewhere after the inauguration of the current Occupant of the White House is a sign of renewed, if belated, political interest by progressives emerging from the Millennial ranks.

And thus the hook of her music. In a 1994 Mojo interview, Mitchell observed without false modesty or irony : "What I realize now is that songs like 'Circle Game' and 'Big Yellow Taxi' have become almost nursery rhymes, they've become part of the culture."  Quite so. 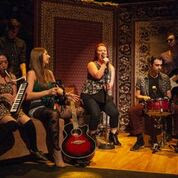 Newcomer this time out Samantha Bourque belts out a classic while returnees Adriana Ravalli and David Z. Cohen rock the beat along with her.
Photo credit : Stephen Rutherford

Firehall's supplied photos reveal once more how "every picture tells a story". In design Circle Game is a cabaret show / garage band / college theatre buddies jam session. There is no true dramatic narrative thread or arc or plot, rather a series of musical snippets and stanzas and whole songs mostly from Mitchell's early oeuvre that are stitched together to please eye & ear & mind. Fully two hours of visual and audial juice that endear and excite.

The first three numbers, interleafed, are "Free Man In Paris", "Help Me" and "Both Sides Now", all of which reflect the ever-recurrent Mitchell themes of personal freedom -vs- commitment -vs- life's illusions / heartbreaks. Is there a better lyric on the subject of freedom than the feisty young independent souls who find themselves "unfettered and alive"? I think not.

Functional hanging-spots for the show's myriad instruments, overstuffed armchairs and piano furniture align the 30-foot deep, 65-foot proscenium. Perpendicular performance platforms mid-stage, strings of Xmas lights, even the requisite faux-Victorian / Tiffany glass lampshade so popular back in the day. The swack of Persian-cum-paisley throw rugs are just like I remember them circa Kalamazoo, 1968. Set designer Carolyn Rapanos must have consulted countless family photograph albums to create such verisimilitude.

Considerable imagination by lighting designer Ian Schimpf to re-create ("re-imagine") what the 60's-70's youthful digs and garage hang-outs would produce by way of rheostat controls. Longtime Arts Club sound designer Geoff Hollingshead brings his rock experiences from staging Buddy : The Buddy Holly Story into effective use in Circle Game, no question. The mixes of electric and acoustic and electrified acoustic pick-up guitar were choice. 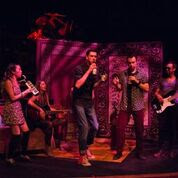 Second newcomer for the show Benjamin Millman does some mean bottle blowing to one of the cuts.
Photo credit : Stephen Rutherford

Particular numbers stand out. Ravalli and Cohen's duet of "Case of You" with a guitar perched horizontally across their knees almost made me forget Dianna Krall's signature version from her album Live in Paris.


Scott Perrie's lengthy moody version of "Free Man in Paris" to start Act 2 was by itself reason to go see this show. The duet mix of "The River" with "Both Sides Now" was transcendent.

And the trio cut of "Big Yellow Taxi" with all the harmonized atonal riffs to make it 2019-y was the 3rd major hi-lite of the night for me two years back.

For their parts directors & creators Andrew Cohen and Anna Kuman are utterly synergistic in their creativity. Cohen's brilliance deconstructing and reconstructing Mitchell's musical lines was matched every step of the way, lit.& fig., by Kuman's blocking and choreography and stage business.

While a couple of numbers struck my ear as longish, by and large this was seldom-witnessed dramatic inspiration. Mostly in how a-sequential the music was -- how un-hitched & re-hitched & repeated & hinted-at & revived contrapuntally Mitchell's music and lyrics became over the night.

As noted up top, Mitchell has produced "nursery rhymes" for nigh unto 50 years. While maybe not a Leonard Cohen versifier, she brings her painter's eye to her musician's ear and the results are often just stunning. The skill of Andrew Cohen to pick her music apart verse-by-verse and song-by-song and stitch it all back together in a whole new whimsical tapestry is to marvel at.

The talent on display at Firehall's production, many of them in the early stages of their professional careers, will no doubt add you to the standing-o squad that surrounded me two years back. This show will thrill folks for all the talent they see & hear & feel & clap to.

It all sings sweetly of age-old themes and anxieties and hopes. I'd go again in a heartbeat.

Posted by Baird Blackstone at 12:21