In the hands of Canadian theatre wunderkind Tracey Power, the show Glory is a wizard concoction where Hayley Wickenheiser channels Billy Elliot and the crowd cheers and dances in delight !

It is a bio-pic snapshot of the 1930's semi-professional women's hockey team the Preston Rivulettes. Their town, near Waterloo, is where the Speed and the Grand rivers converge. Fittingly.

Because speed and grand are what Power and director James MacDonald draw compellingly out of their five member team. Four hockey ruffians who happen to menstruate are led by an irascible 40-something coach whose formative years were spent in a WWI German-Canadian internment camp in Kapukasing.

He is now the local rinkmeister at the Lowther Street Arena in Preston. He floods and freezes the sheet and sets the local teams' practice times. Just a cover for his wistful dreams about the Cyclone Taylor superstar he never became despite some early promise.

The Grrrlllls! for their part start out as a clutch of summertime teen-age baseball buds : the Ranscombe sisters Hilda and Nellie and the Schmuck sisters Helen and Marm. Hilda is chief jock here. A bit dyslexic, she stays away from work in retail where she fears her trouble with numbers may deep-6 her.

But ice skate she has since a tot. She's a whiz. She convinces her buds to find winter divertissement for themselves by forming a hockey team to compete in the Ontario women's league.

And compete they do. A few hundred league victories plus provincial and national championships in seven short years along with the predictable broken teeth, black eyes, busted pride and side-stepped dreams all trip across their path along the way to the Canadian history books.

As an immigrant Canadian from NFL country, hockey has always been a "new" gig for me, even 50 years on. But I could watch over-&-over the Power-MacDonald choreography of hockey-dance -- with its ritual ceremonies of skate, stickhandle, pass, shoot \ backhand, wrist, snap and slap! -- with no dialogue or background sound whatever. Like Sports Centre on mute. No question -- could watch again-&-again-&-again and be magnetized-&-mesmerized each and every time.

Because the "routines" stepped-out by the four women on stage are a wonderful mix of stop-action hockey shots and blocks done in sync with au courant ballet moves. No real skates, just lace-up boots feigning a life as skates. No ice, just a lit dance surface whose chill you can almost feel.

Most effective of all, perhaps, was the near military-precision and constancy of the faux skate-stops each player pulled off each time they came to a halt or skipped off-ice. Brilliant ! in conception and execution both. 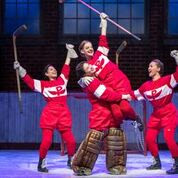 Victory over the Toronto Ladies (sic) after defeat at the hands of the Edmonton Rustlers some years back brings on hope for Olympic glories that would not happen until the 1990's and Hayley Wickenheiser's reign.
Photo credit Chiknskratch Productions

Tough times -- the Depression and Hitler both;  all the customary discrimination against this "bunch of dolls" told by Coach Fach to "Man up!";  troubles trying to hustle up money to travel to tourneys across the land.

Power includes a chunk of social commentary in her script. "Welcome all, except dogs and Jews!" a sign declares outside one arena. A Mackenzie King immigration officer at the time the MS St. Louis with its 900 Jewish immigrants fleeing Hitler was heard to remark after being denied a berth in Halifax harbour : "Even one is too many."

Women's suppression under patriarchal tradition is given plenty of resentful air-time. "I'm unfit to play hockey," the commentators claim, "not because of my talent but because of my vagina!"

But in the end -- despite being one-down or two-down -- these women and their 2019 actors nevertheless bring the full force of the "new feminism" to the fore honestly and forthrightly -- not just pay it lip service the way the political sycophants-&-cynics then-&-now so delight to do.

And so while the denouement of Act 2 perhaps dragged a bit, in all this is a dance delight about hockey whose images will stick with me for years to come, lit.& fig. I'd go see Glory two or three times more and no doubt be breathless after each sighting -- that's how fresh and clever in conception and delivery it truly is. Not too many periods left in this team's season : grab your seats now!