The Tiananmen Square "slaughter of the innocents" ordered up by Chinese leader Li Peng in 1989 resulted in some 10,000 people or more -- mostly students -- being massacred, Wiki tells us. Thus to link that horror to a bit of buzz over a mere game of basketball -- a "friendly exhibition" game at that -- is a stretch, no question.

Until, that is, playwright Lauren Yee puts her deft hand to work on the script and then gives the show over to Meg Roe to design and deliver.

The result on view at ACT's BMO stage in Olympic Village is as the header above calls it : "a basketball ballet". It's a seriocomic drama, a paean, really, to her dad's basketball fixation as she grew up in 'Frisco in the 90's. Mix those memories with a fanciful but believable tale of love, displacement and the tragedy of just being born in pre-modern China. Born in transit between times and cultures a world apart. 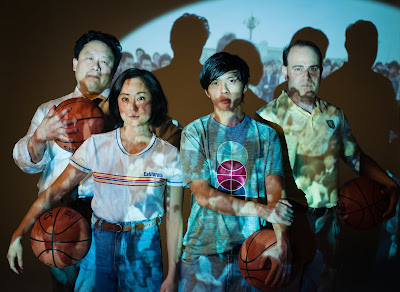 A bunch of fun in the piece is centred on Coach Slezak, an emigrant divorced Bronx Jew with a lexicon of profanity to make even a San Fran sailor blush. He is all-male, all-basketball, 1/2-b.s.-artist and 1/2-doting father figure to his "boys". His Chinese-American superstar Manford Lum taunts him when they're in Beijing : "Fuck it, a guy who can't even talk to his own daughter -- and I'm family...?"

For his part, Manford ("rhymes with Stanford") is a hustler, lit. & fig. At 17 he hasn't even graduated from Galileo High in Oakland but he's relentless, relentless, relentless demanding a spot on the USF exhibition team. Turns out he has ulterior motives to want to go to China. All stemming from a reproduced 1971 Chronicle news photo showing Slezak shaking hands with greenhorn coach Wen Chang in China.

Slezak had mentor'd Chang. Started instantly by nicknaming him "Sparky". One of their exchanges was absolutely priceless : the daunting driving Slezak is trying to coach Sparky on the fine art of trash-talk : "You have to get into their heads and fuck their shit up!" he says. An aghast Chang replies : "You mean you have to copulate on their feces...?"

A reproduced 1971 news pic of the two runs in 1989 next to an obit of Lum's mom who'd just died in Oakland. She was 6' 2" tall and loved playing hoop back in the day even more than Slezak. But never told son Manford. Still, her broken-English mantra to him was this : "Every game is a second chance to live your life all over again."  She loved the Warriors, sure, but her tricky ball-handler son was her all-time favourite player.

As the production photo immediately above shows, the magic of this piece is precisely that : its production. Its lights. Its soundscape. Its choreography.

Doing research for the show, I came across the following description in TorontoNow by Kathleen Smith about a piece there a month ago called Revisor. Both TGL's director Roe and sound designer Alessandro Juliani were involved in this Crystal Pite / Jonathon Young dance-theatre hybrid  :

"The physicality becomes intense and more reflective of internal struggles. Text remains, but is now all over the place as Owen Belton, Alessandro Juliani and Meg Roe’s aural design amplifies and distorts, the metre of the words becoming a beat that drives the movement. Single phrases are excised from the text and looped."

Quite so, too, in TGL. The John Webber lighting design and Chimerik director Sammy Chien's projections blended exquisitely with the soundscape. The imagined sequence of Lum's mom working out in a Chinese gym was a terrific mix of hip-hop electro-tom-tom with Tanya Tagak-style throat singing (Tagak's current duet with Buffy Ste. Marie "You Gotta Run" would have been priceless here.)

As for loops in this hoop story, dialogue from early in the show cycles back and pinches itself anew into the closing scenes. The final sequence with all four actors on the lit court as Manford does his version of a Steve Nash \ Steph Curry race for glory is pure treat to watch and hear and absorb.  First-rate performances by them all, but Toby Berner's Saul Slezak was no-doubt a front-of-the-line Jessie Award nominee performance.

Meanwhile, this : I could not help but hear echoes of the late North Carolina Tarheels basketball coach Jim Valvano ring in my ears watching TGL : “To me there are three things everyone should do every day. Number one is laugh. Number two is think -- spend some time in thought. Number three, you should have your emotions move you to tears. If you laugh, think and cry, that's a heck of a day."

I had a heck of a day today during the final preview matinee performance of The Great Leap. If you go I can almost guarantee you will too.

Posted by Baird Blackstone at 20:51