The flik Shakespeare in Love won a fistful of Oscars back in '99 for writers Tom Stoppard and Marc Norman. But if you haven't already, don't watch the celluloid until you have first drunk Bard's smackulus cool-aid stage version by Lee Hall, no vodka required.

Its central gag-line launches when stumblefooted Rose Theatre owner Henslowe tries to explain live drama to his impresario Fennyman : "Let me explain about the theatre business. The natural condition is one of insurmountable obstacles on the road to imminent disaster...but it always works out in the end." Fennyman balks : "How?"  "I don't know, it's a mystery..." Henslowe flips back.

What is no mystery about this Bard show is Daryl Cloran's fully requited love letter to the art of stage acting in his production. A total celebration of the line made famous by Buffy Ste. Marie oft-cited by BLR.  "God is alive / Magic is afoot!" Because Cloran utterly delivers on the many concepts of the script : Theatre is community. All artists need a muse. Love is an infection -- "like sickness and its cure together" as Will puts it. 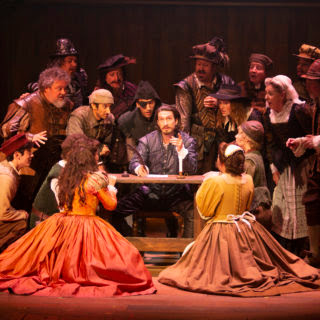 Will shakespeare doesn't lack for moral support to urge him past his writer's block -- all the local townspeople are eager to digest any of his immortal sonnets or new plays and encourage him mightily. .
Photo credit : Tim Matheson

Pure fantasy -- all fake news -- the script has a local wannabe thespian Viola de Lesseps audition for a show-in-the-making with the risible working title "Romeo & Ethel, Daughter of the Pirate King".  She's dressed in drag, of course, because the Queen's moral guardian Tilney ensures no woman can be "on display" as an actor in public theatre. She masquerades as "Thomas Kent", replete with peel-off moustache. Young Shakespeare, meanwhile, suffers hugely from writer's block. He whines to Henslowe "My quill is broken, my well is dry, the proud tower of my imagination has collapsed!"

Ostensibly estranged from wife Anne Hathaway, he soon meets Viola wearing aristocratic gowns at a family party. They dance. He flat-out swoons. Viola's / Thomas's joint fakeries take awhile to consummate, but in time Bill and she are truly in love. She also gamely acts as muse to inspire in him the poetic soliloquies of his ultimate script Romeo & Juliet. His most deathless lines he pens for her to recite. "I write them to make you immortal," he romanticizes. 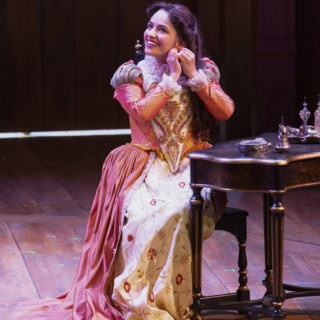 As Viola, Ghazal Azarbad is enchanting and coquettish and at the same time a delightful naif who doesn't fail to charm even for a second.
Photo credit : Tim Matheson

As The Guardian's ever-clever critic Michael Billington reminded folks half-a-decade back, anyone who's ever been involved in a theatre production knows that pandemonium and mobocracy are always at play. Egos tumesce, the writer is 2nd-guessed with every re-written line and scene they spit out, the coin needed to fund the show is always scarce -- in short there is a crisis-mentality that threatens to Stop! any production at any second.

And so it is with this series of plays-within-a-play. Bits of Will's sonnets get quoted over and over, as do take-off lines that are offered up with a wink from his countless plays to come. And, as if conjuring Chilliwack rocker Bill Henderson, Cloran reminds the crowd repeatedly "If there ain't no audience, there ain't no show." He titillates us not only with the endless Billy Bard quotes but with the larger-than-life characters of that time and place : not just Marlowe, but Richard Burbage of the rival company cross-town, The Curtain, not to mention Queen Elizabeth herself "Oh for God's sake, I know my own name, don't wear it out!" she scolds the troupe. 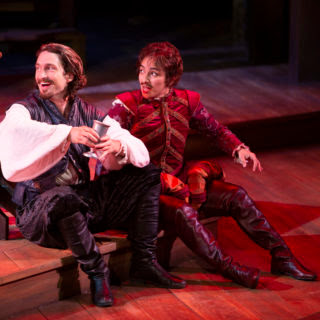 Charlie Gallant's Will Shakespeare plays the gender cards cleverly : one doesn't know if Ghazal Azarbad here as cross-dressed Thomas Kent is to play the part of Romeo or the part of Juliet or none-at-all when the show finally launches.
Photo credit : Tim Matheson

Can theatre with all its charades and pretence capture the true nature of love? Will bets his final version of R & J can do just that. That is the 50-quid wager from Lord Wessex the Queen must adjudicate. Can Will pull this off, with or without Viola who's about to emigrate with her new hubby -- the same Lord Wessex -- to the colonies to grow tobacco?

The staging of the final scenes are done in the manner of Michael Frayn's riotous 1982 Noises Off thanks to set designer Cory Sincennes' brilliant lazy-suzan centre stage. It rotates dizzyingly between the action front-of-house and all the behind-the-scenes shenanigans that threaten to kill the show dead in its tracks.

Charlie Gallant as Will and Ghazal Azarbad as Viola are choice and sexily a just-right fit, Scott Bellis's Henslowe manages to steal the show altogether more than once, Anton Livopletsky's Lord Wessex is impuissance at its best, Susinn McFarlen's Nurse is duplicitously delicious, and, as always, Jennifer Lines brightens the entire room even when she frowns -- to name but a few favourites from this cast of 18 who play 26 roles, plus Spot the dog : "Next time write something funny!" Queen Liz commands Will as she hands him the bag of ducats he's won, adding "And don't forget the dogs, I love dogs!"

While not "true" Billy Bard, this knock-off of his life and times truly shows us how live theatre productions can and do, ultimately, work on a whole different level than film.  How? You got it by now : "It's a mystery!"