From the footlights : There is irony -- somewhere, somehow -- that a PhD in molecular biology who does prostate cancer research at USA's Sloan Kettering centre also stars in the solo-show she conceived, created, and wrote called : 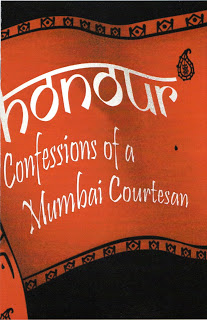 Current Cultch website ads for this dynamo named Dipti Mehta refer to her script as "a fun and poignant look at the exotic and dangerous life of Mumbai's real-life brothels".  One could be forgiven for coming away with the notion Honour will be about as light and escapist as Casablanca. It decidedly is not.

Through dance and narrative woven seamlessly in both Hindi and English, Mehta stitches together the stories of six people who are "married", as it were, to a brothel. The two main characters are teen-ager Rani whose prostitute mother Chemeli is grooming her to follow Mom into the trade. Her entry will occur when Mom sells off her "honour", i.e. her virginity, to the highest bidder. [Current bidding some 100,000 rupee, or about Cdn $2,000]. Mom's hope, meanwhile, is that Rani will become a "paramour" and an "adventuress" as a pampered "kept woman" rather than spend her life as a whorehouse slave like she has.

What the show brings to the stage : One year back, also as part of Diwali in BC, Anusree Roy's Brothel #9 took over the Cultch Lab. It, too, was a look at Indian prostitution from the perspective of a young woman (played by Adele Noronha) who was sold into the trade by good ol' Dad. (She thought she was going to work in an uncle's light bulb factory.) Roy's character was ennerved by the dramatic excellence Noronha gave the script : she brought on tears.

Not so much with Honour. It, by contrast, is more an interpretive dance and performance art approach to the same themes. One relates less viscerally to the storyline as Mehta tries on for size the show's various roles serially. Joining the teen-age virgin Rani and her mother Chameli are Shyam, a pimp, son of Chameli's late pimp; the stereotypical fat, old rich guy Laal; a Hindu brahmin satyr; a eunuch / transgender whore known as a hijra who is a superb creation by Mehta; and an American anthrojournalist she talks to off-stage who is trying to write about India's red light districts.


Production values that hi-light the action :  Aside -- As a 40-year-old I escaped White Rock after 20 years to take up work in DTES Vanvouer. Shortly on the heels of Expo I learned quickly how "dignity" and "integrity" and "honour" are not innately defined virtues. Learned quickly how street people have their own litmus tests of character and probity that demand equal respect as do those who amble along the pier in Semiahmoo Bay.

It is this recurring dramatic theme -- respect & recoupment & redemption -- that Mehti seems to want to project through her ambitious and at times sparkling one-woman show. The production demonstrates more than anything else just what empathy looks like in real time in the charnel reaches of Mumbai.

At one point in the voice and persona of the pimp Shyam she takes a shot at the peeping-eye American journalist:  "You think you are all Mahatma Gandhi. Huh. We are just a small people with big dreams." Rani's big dream is to marry the boy Nandu whom she loves. When he is found out, Shyam breaks his bones and threatens to kill him.

For their part, Shyam and Chemali's big dreams are to make money from Rani's deflowering, which, of course, ultimately happens. No surprise, in the end she becomes the courtesan that fate and caste and fortune conspire to inflict upon her -- "insulted, disgraced, objectified, discarded" -- same as the mythical character Karna from the Bhagavad Gita story "Mahabharata".

The creative mix of characters riffing off one another in rapid-fire frequency between Hindi and heavily-accented English is a sense-adventure one "experiences" here rather than sees and hears and feels and cogitates in the normal Western dramatic manner.

As an introduction to Bhagavad Gita thought on the concept of moksha (liberation), this is a more immediate and impressive and immersive baptism than any college world religion course could ever aspire to be.


Acting pin-spots : The solo dramatist in all of this -- creator & imaginator, writer, performer -- Dipti Mehta is simply astonishing. The couple on my right in Row 3 allowed as how they were in Mumbai a year back and said that this show, in essence, summed up their whole month there. Not just as a brothel / fate story, but on every level -- a script & production that tries valiantly to explain comprehensively, succinctly to the Western mind just what India might be all about behind its veils of history and mythos.

Who gonna like : Honour is edgy, biting, and "poignant", yes, but one would not call it "fun". It is an impressionistic piece. An evening of light and colour and sound that creates a dramatic gestalt in a way altogether different from Mr. Roy's more traditionally-structured drama Brothel #9 from 2016.

Part of the show's profits go to two enterprises that are working to free women and girls from the enslavement of brothel life in India, Honour Her and Last Girl First. Tuesday's performance is the last of the run that is not sold out.

Nothing like it have I ever experienced on stage anywhere, anytime. Quite an adventure it truly is : one can only sit back and absorb its inspired invention.

Particulars : Created, written & performed by Dipti Mehta.  At the Cultch's VanCity black box Lab stage, Victoria @ Vennables. On with limited seats available only until November 4th. Tickets by phone at 604.251.1363 or on-line at tickets.thecultch.com

Addendum : From the Show Info page in the program :

HONOUR : Confessions of a Mumbai Courtesan, is a coming of age story of Rani, a young girl in a brothel. While the play is completely fictional, Dipti was shocked to find that she was telling stories of real people when the saw a video on BBC about an organization called Kranti that is helping daughters of prostitutes from India. And there she was in that video on BBC, Rani, a 16-year-old telling her story. HONOUR is a movement to break social stigma against brothel dwellers, a movement to build bridges and connect humanity that exists in brothels to the world, a movement to bring all the Ranis out of their circumstances and become wind beneath their winds.

HONOUR is grateful to return to Vancouver this year and for the opportunity to make a difference through art. HONOUR is our humble attempt to connect theatre with a cause. A portion of the proceeds from the artist fee will go to Apne Aap, an international aid organization doing grassroots work of rescue and rehabilitation of trafficking victims. To follow the show's journey link to Honour.

Posted by Baird Blackstone at 17:11