From the footlights : Homeward Bound is a nifty little double entendre to remind us all how "bound" we are to the "homeward" influences we grew up with. And we don't have to go home for Thanksgiving dinner to prove it. The Elliott Hayes 1991 script is in one sense just an updated version of the 1940's Don Ameche / Frances Langford radio & t.v. show featuring the neverending verbal skirmishes between the Bickersons. In Hayes' hands they've morphed into the Beachums, and there's a ton of sand-&-salt for the family to squabble around in after Sunday dinner. No blunt-force beach toys here : quelle surprise, sarcasm is the scalpel all of them indulge in to slice one another up. 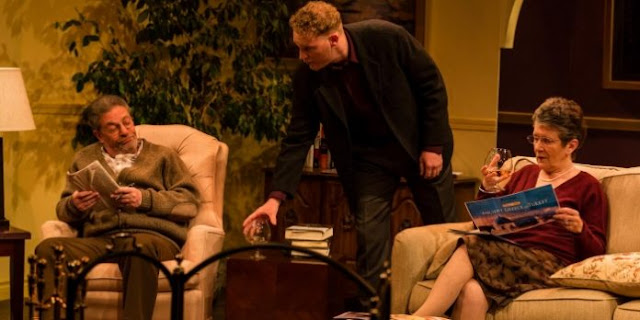 Just another Sunday dinner with lashings of wine & sarcasm at the Beachum household.
Javier Sotre photo.

How it's all put together : Nothing particularly eccentric about the Beachums. Other than retired-lawyer Glen (Howard Siegel) has cancer and, hiding behind his endless crossword puzzles, he admits quite offhandedly he can't decide -- morally, ethically -- whether to suicide or arrange his own murder to avoid the painful entropy facing him. Family matriarch Bonnie (Anna Hagan), meanwhile, interrupts her endless ironic and witty banter wondering whether Tibet or Maui would be a better vacation spot once Glen kicks off and she sells the house to travel. In passing, Bonnie blithely admits how her emotional detachment from hubby, kids and the grand-kids is now pathologic.

Daughter Norris (Mia Igimundson) has twin Grade 2 boys and is the nattery sibling : "The only reason I tell people what to do is because I know what they should do." Thirty-plus, she is pregnant, but not by her estranged drunk husband Kevin (Chris Walters). Her brother Nick (Jordan Navratil) -- more emotionally in-check than she -- has a gay pal named Guy (Seth Little) who shows up in time for dessert after a meeting. When Nick describes him as his lover, mom Bonnie interjects : "That's a terrible word. It's too explicit. It sounds like a verb." Aside : Interesting to me how such smug stuff was written at the end of a 5-year period when more than 4,000 Canadians had died of AIDS or HIV complications. 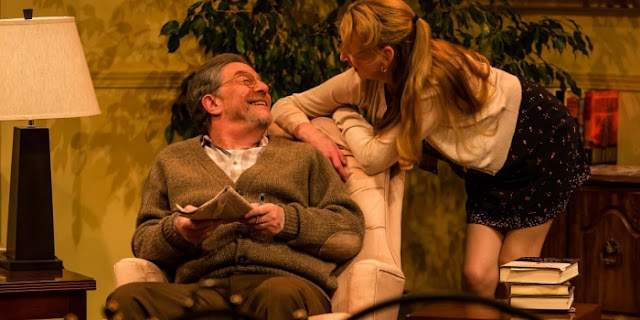 Maladapted? Feckless? Wounded and vain? No, the Beachums' family beachhead is just another sunny picnic of alcoholism, adultery, and self-centred egos that have been commonplace in our society for decades : "We live in an age when scandal is relegated to the routine," Glen laments : "Everything is eking towards banality." And while Hannah Arendt coined the expression "the banality of evil" in reference to Nazi architect Adolph Eichmann, Chekhov earlier (d. 1904) was punchier, as if anticipating our 21st century media-infested life in toto : "There is nothing more awful, insulting and depressing than banality."

Production values that shine through :  I have seen countless Glenn MacDonald sets over four decades. This surely is one of his best -- far more balanced and nuanced than any of playwright Hayes's angst-ridden characters. The button-back club chairs anchoring the action downstage left and right were particularly spot on, as were the lamps of Jordan's Furniture pedigree. Terrific comfy middle class cheats atop the requisite Persian area carpet.

The script for its part -- pushing 30 -- is remarkable for its non-sequiturs, its lacunae and pauses, its syncopated jibber-jabber to-&-fro from topic-to-topic in nanoseconds. That I have not previously been exposed to playwright Hayes and his subtle grasp of how dialogue actually plays itself out in real time is my loss. Regrettably he was killed by a drunk driver shortly after crafting this play, dead at but 37. One can only imagine what his oeuvre would have produced were he to have continued to hone his clever skills with dialogue and dramatic tension.

Acting pin-spots :  The contrasts / similarities between Nick and Norris were a delightful counterpoint : they positively loathe one another as only siblings can. "Why is it when my friends irritate me they don't, but when my family does, they do ?" Norris fusses. And continues : "You always talk about me behind my back to my face !" Meanwhile their "Bitch!" \ "Bastard!" exchange, while maybe trite, brought Who's Afraid of Virginia Woolf? instantly to mind. In the main I would have to say that Norris's lines by Hayes were the better, but Jordan Navratil was a more compelling presence with his achy, shaky fists. "Just because I'm being reasonable doesn't mean I'm reasonable," he protests.

Howard Siegel as Father Glen quite grabbed me. He was a very chummy and likeable and philosophical sort whose body and easy smile were 100% in sync with the Barcalounger his butt was glued to most of the night. He sums up, quite pricelessly so, the spiritual cacophony played out by his morally tone-deaf family : "My death becomes less significant every time someone opens their mouth !"

As Mom Bonnie, Anna Hagan was a proper mix of ironic know-it-all cerebral nonchalance -plus- a slingshot of zingers, too -- often together as in my favourite line from her : "Norris, if you're going to take your parents' death seriously, you're going to be very disappointed." Or this : "The nicest thing about having children is you see the sins of your mistakes."

To reveal how all this dissonance and awkwardness and "is-ness" of Beachum family life plays itself out in the end would be an unfair Plot spoiler so I shan't. You wanna know you gotta see. Suffice to say parsing their name as "Be A Chum" isn't how it all plays out.

Who gonna like : Aside from some dated references to typewriters and "the conventions of the middle class" -- both long-dead phenomena that are but romantic memories -- this stuff is Albee meets Chekhov meets Ionesco meets Pinter. While the acting is not wholly consistent from all players, the Hayes script is a Kodachrome moment captured with flashes of brilliance in its film noir cadences and cleverness. I'd go again for each and every painful yuk Hayes sets up for the Beachum family -- and for us who from our own family histories relate to their stories in a heartbeat. Like them, we often find ourselves laughing to keep from crying.