Critics and PhD candidates who have a difficult time slotting a Shakespeare play as a history play or a comedy or a tragedy are betimes inclined to call it a "problem play". Traditionally the moniker has meant "What is the problem to be solved?" But not this show as directed by Rohit Chokhani and Johnna Wright.

Because no one can "solve" ongoing gender politics. No one can "solve" centuries of cultural & religious & class clashes. No one can "solve" history that unfolds -- often unravels -- before us. What is but fake news to some is perhaps truth or possibly a risible, demonic fairytale to others.  All's Well is the last of these at Bard this 30th year anniversary season.

Once again Will Shakespeare's women better their men who are usually awash in their customary bath of testosterone and ego tumescence. The women, to counter them, must be more discerning : reveal wit and grit and cleverness and a canny wisdom to carry them through. Just so in the hands of Chokhani & Wright.

The “right stuff” formula of WS is executed smartly and stylishly with unrelenting creativity. Instead of 17th century France and Italy, the show is struck in 1946/47 India. The British colonials are exiting stage left after 350 years. The country is being partitioned in two : the so-called Radcliffe Line splits the provinces of Bengal and Punjab, the former to become Pakistan. 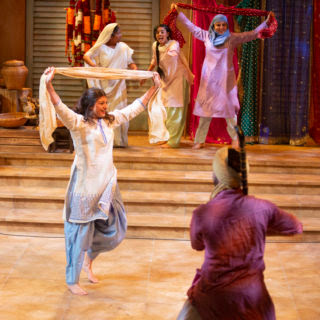 Colourful scarves and costumes festoon this production of All's Well That Ends Well set in the final moments of Britain's 350 colonial occupation of India in the late 1940's.
Photo credit : Tim Matheson

From this it is both a small jump and a giant leap to colourful Bollywood-style dance sequences straight out of the popular flik Monsoon Wedding. For important soliloquies being delivered in the Punjab tongue by All's Well principals. For sitar and drumbeats and flute that exude straight from Indian soil and soul both.

The outgoing Viceroy is sick unto death. The military establishment doctors have written him off. Enter Helena, daughter of a recently deceased Bombay doctor. He has bequeathed her magic potions derived from folk medicine. Young, Helena has been informally adopted by the Countess, whose son Bertram she is utterly smitten by. Helena makes a blood-bond with the Viceroy : if she fails to cure him, she dies. If she does, he will bless whomever she chooses to marry. She gets Bertie, all right, but he's horrified at her lower caste status than his aristocratic one. He schemes to not consummate the marriage and hies off to the north to do battle with insurgents. Shortly Helena is in hot pursuit. 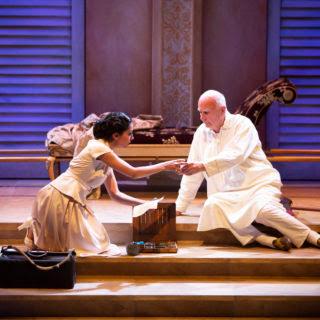 Serena Parmar as Helena gives the failing Viceroy Bernard Cuffling potions and salves to reverse his current deathwatch and win herself a husband, Count Bertram, who spurns her and plans sexual infidelities.
Photo credit : Tim Matheson

When Helena in peasant-disguise arrives north, she meets a widow and her daughter Diana. Diana giggles how Bertie, a bachelor as far as she knows, has the hots for her. Helena reveals that she is Bertie's lawful wife, and in finger-snap widow and Diana and Helena plot how to save Diana from Bertie's lustful advances and get Helena pregnant by him in the process. WS's Elizabethan audiences were about to witness ye ol' "bed trick" once again. 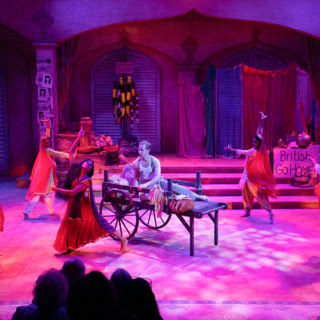 This Bertram is said by his mom the Countess to be but a "brash and unbridled boy". He tries to snare Diana with such lines as "Give thyself unto my sick desires!" even after he admits to being already married to Helena. She tricks him into a midnight visit under blindfold.

In all his schemes and machinations, Bertie is aided and abetted by the script's chief clown, his foppish friend Parolles who lives a cross-dressed life sporting wildly-coloured gossamer scarves to offset his military-issue puttees. Jeff Gladstone's turn as Parolles is a droll and arch grifter of the first order. He manages to escape with his life despite his treasons against his army comrades, but just barely. "Simply the thing I am shall make me live," he declares with a classic, ambiguously gay wink.

The countless visual and audio surprises in this production make it possibly the cleverest re-write of a WS script yet performed by Bard. When Widow (Veenesh Dubois) and Helena (Serena Parmar) share their life secrets together -- speaking Hindi -- the effect is compelling indeed.  Add the lights, the period costumes, the wild temptress Indian dances by the ensemble and, no question, all's well that ends well.

Posted by Baird Blackstone at 15:43 No comments: