Not everyone buys in to the feminist assertion that the West, particularly, is a "rape culture". Or that the heart of our troubles is a "patriarchal" system of men always on top, women beneath. Or believes the glib metric that men think of sex once every seven seconds.

Meghan Gardiner's script Gross Misconduct lays these precepts down as the sine qua non starting point for her taut and timely take on what she calls sexual assault. ("Assault" implies physical attack : assault can, however, be but a look, a whistle, a snort.) Her plot line is contrived and coincidental. Almost closing in on a kind of cognitive coercion. Still, the play qua play is brilliant in its impact. Its character(s). Its staging & blocking. Its themes.

Set in Canada's most notorious max. security prison -- Millhaven -- it ravels the lives and tales of seven people, only four of whom are on stage. Two rapes in "polite society" bring the four stage folk together. Then there are the acts of sexual assault and rape inside Millhaven. Then two revenge murders, each by plastic toothbrush, just to round it all out. 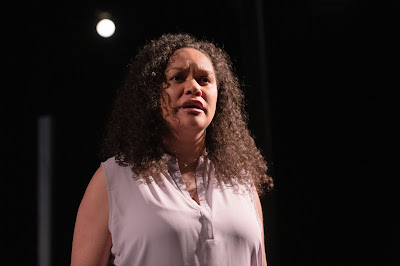 The biggest victim of all is not the murdered rapist or his murderer, but rape victim Abigail / "Shorty" (Sereana Malani) whose PTSD from the summertime Halliburton Beach attack by her "Crush" Kevin has scarred her for life.
Photo credit David Cooper

The staging is a style too seldom seen. Actual full-on theatre-in-the-round : not a horseshoe arrangement, not Havana Theatre bleacher intimacy inches from the stage -- no, a boxing ring -- this time a prison cell, smack dab in the centre of Gateway's Studio B blackbox room surrounded on every side by viewers. As blocked by Director Kayvon Khoshkam, the play pierces the fourth wall continually. Particularly rape victim Abby (Sereana Malani).

She circles and cycles and surrounds the centre stage prison cell continuously. Even plunked herself down next to this reviewer and handed me her empty 16 oz. Coors Light can. By play's end her agony and the echo of the No! No! No! No! she yelled dozens of times as she is being raped envelop both brain and heart. She induces an empathy unimaginable were this staged on a typical proscenium deck. When she describes how ten years later she can remember "every bit of sweat that landed in my eye, my ear, on my hair", the impact is breathtakingly chilling and sad.

Speaking to her unseen brother, prisoner John (Ian Butcher) with whom she has a spiritual relationship, she shrieks the true essence of her pain when referring to her rapist : "He became a victim, you became a hero, and I just disappeared!"

The two other main characters are Gareth (Scott Bellis) as the scarred and sorry prison guard and wannabe warden -- enabler of sexual coercion in Millhaven's exercise yard. Not surprisingly he is a predator himself of all the vulnerable needy newbie young prisoners who come into his grip. He variously calls them goldfish, guppy, tadpole, puffer fish, little clamshell, angel fish, flounder. Chief flounder in the piece is Corey (Mike Gill), an Ivy League smart-mouth who is an accused child rapist. His dad -- whom he says he hates -- is nevertheless a wealthy and powerful fixer who will get him set free, he thinks. Spring him loose, maybe, but never again to be "free".

This is first-rate drama. Playwright Gardiner, herself a victim of sexual assault, lays out her aim clearly : "Calling sexual assault a woman's issue has taken the responsibility right off of men's shoulders." For his part, Artistic Director of SpeakEasy Theatre Kayvon Khoshkam said this resulting from his directing the play : "We are unlearning. For many men it is the environment we grew up in, the culture that encouraged us, and the media that built our perceptions of manhood."

Only four characters, this is perhaps the tightest casting and individual stage performance I have witnessed so far this year. Agnes Opel's valedictory song "Familiar" strikes up as lights snap off : "This love is gonna be the death of me... / We took a walk to the summit at night, you and I / To burn a hole in the old grip of the familiar true to life."  Burn a hole indeed -- this script, this performance, these actors together do it all with searing, blistering, incandescent insight. I would go again with nary a blink of hesitation.

Posted by Baird Blackstone at 20:21